I started liking tomatoes about two months ago. I was driving to palm springs for a weekend escape, and picked up a pita sandwich at a nearby restaurant at the start of my trek. I didn't carefully inspect the to-go box as I usually do. Driving with one hand, manhandling my pita in the other, and speeding, all while driving straight into the sun (sorry, mom) didn't allow for me to pick open the sandwich to make sure there were no rogue ingredients I didn't ask for. Turns out, there were...tomatoes. Dun dun dunnnn. 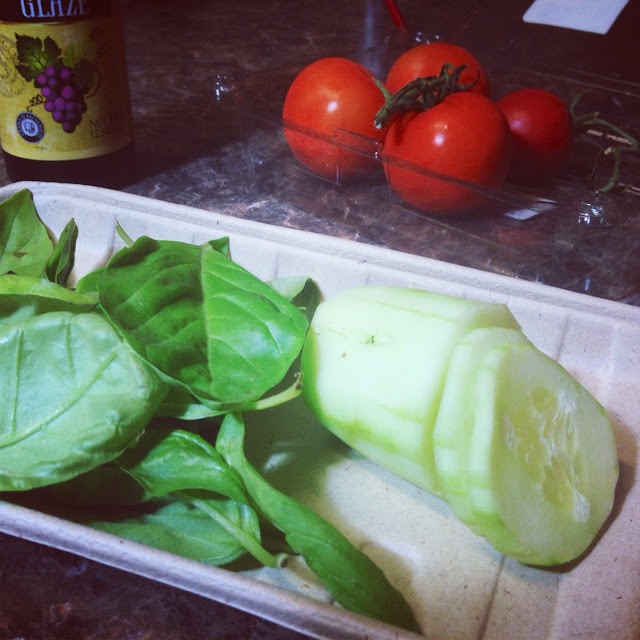 Oddly, that new unnatural flavor was rather delicious! I didn't figure it out until one of my last bites, and was equal parts disgusted, confused, and satisfied. I've always hated tomatoes. I've picked them off of sandwiches, removed them from salads, been careful to only eat the pureed portions of tomato sauce, even avoiding ketchup for the past 23 years of my life. Ick. I'm haunted by the memory of when my best friend's mom forced me to eat a cherry tomato in the 2nd grade. Just horrifying. And all of a sudden, I like em. It's weird. 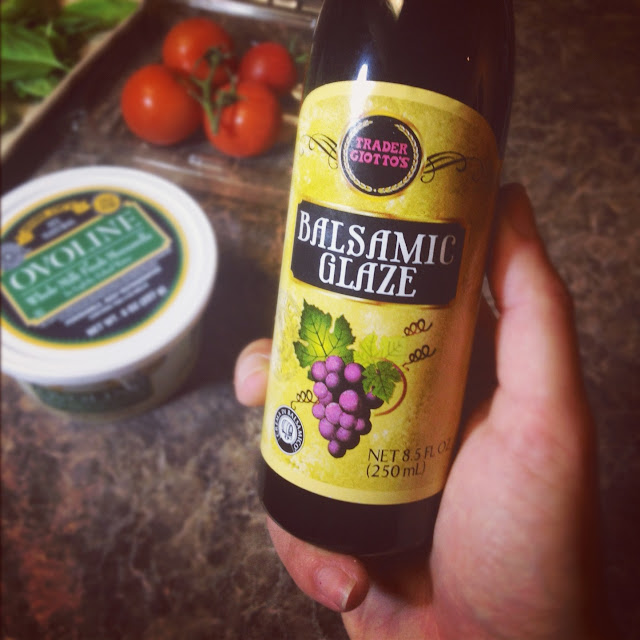 I'm still easing into a love tolerance of tomatoes in most situations, but can't get enough of Caprese salad. I want to eat it at every meal, all the time. And after lurking through the isles of Trader Joe's over the weekend, I came across this bottle of Balsamic Glaze. An upcoming dinner party was on the horizon so I decided to test it out, because I was definitely planning to weave something caprese-y into the menu. This stuff is a game changer. A balsamic reduction in a bottle? Thick, sweet, wonderfulness without the slow, time consuming boil and constant fear of burning? Who has time for that! IN.CRED.IBLE I tell you. 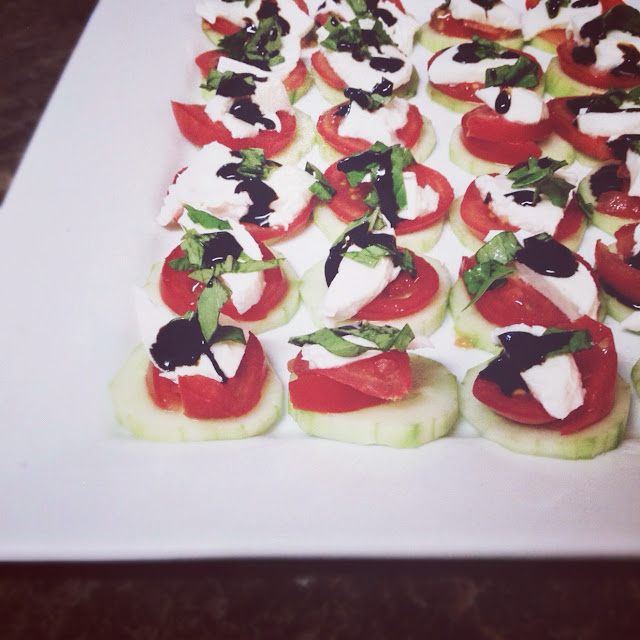 I can't even. These delicious little bites were gone in all of five minutes, which is about the time they took to prepare.

Ingredients (all from Trader Joe's, a.k.a. market heaven)
- Take out the platter or large plate you plan on displaying your beautiful bites. I find it's easiest to assemble directly on the plate, instead of attempting to move them after.
- Slice cucumber into about 1/8 inch. slices. The thicker, the less you get per cucumber, but really it's up to you.
- Cut tomatoes into equal sized slices, and layer on the cucumber.
- Chop the mozzarella into thin enough slices/hunks that will satisfy your cheese craving per bite. It's very scientific.
- Chiffonade the basil, the fresher the better. Sprinkle on top if the bites.
- Drizzle with the balsamic glaze, then sprinkle with sea salt.
- Feast.